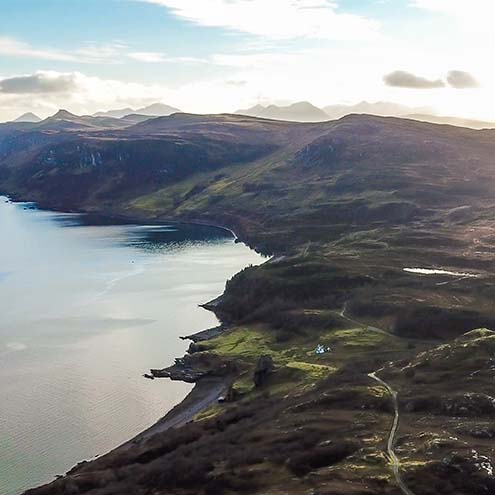 The Isle of Raasay lies off the west coast of Scotland in the Inner Hebrides, separated from the Isle of Skye by a short 25 minute ferry journey.

This corner of the world is known for its breathtaking natural beauty, geological variety, and one of Scotland’s most incredibly diverse ecosystems.

Comparable in size and shape to Manhattan Island, the Raasay Island has only 160 residents. Today, over 10% of the island work at the distillery.

Rooted in centuries of illicit distilling and rich in history, culture and community, from Bonnie Prince Charlie and celebrated Gaelic poet Sorley MacLean, to the enigmatic Calum’s Road – Raasay Island has a character of its own, distinct from any of the other Hebridean islands. It is also a fantastic base from which to explore the neighbouring Isle of Skye.

Translated from Old Norse as ‘island of the roe (or red) deer’, Raasay, or Ratharsair in Gaelic, boasts a diverse geology, forged in volcanic fires.

Water from our well, known as ‘Tobar na Ba Baine/the Well of the Pale Cow’ flows across volcanic rock and filters through Jurassic sandstone, adding minerals crucial to the flavour in our whisky and gin.

Our fine-tuned range of expressions harness Raasay’s raw elements of water, and for special releases, local peat and barley – and bring them to life through premium Scottish gin and whisky.

The Island’s People and Community

Our whisky and gin are an expression of people and place.

One hotel, three bed and breakfasts, two shops, one primary school, and a distillery built by the hands of several islanders – make up the island’s close-knit community.

Generations of people, knowledge, and culture shape Raasay Island’s philosophy and influence the character of our spirit. An island, distilled.

Raasay Island dates back to the Gaelic Kingdom of Dalriada in the 6th Century and became a Norse subject in the 8th Century, which is why we see such a strong Norse influence on our place names.

The island returned to the Kingdom of Scotland in 1266 and was ruled by Mac Gille Chaluim, the Macleods of Raasay, from the 16th-19th Century before a succession of private landlords.

Bonnie Prince Charlie, undoubtedly one of the most famous historical figures to set foot on Raasay, spent two nights hiding out on Raasay following the 1746 Battle of Culloden. The Macleods of Raasay suffered brutal retribution at the hands of the Hanovarian troops for their support for the Jacobite cause, all their livestock killed, homes and boats looted and razed.

Raasay is also the birth place of Sorley Maclean, the most significant Gaelic poet of the 20th Century. Sorley Maclean’s powerful imagery in works such as ‘Hallaig’, portrays the grief and hardship suffered by his native Raasay as a result of the Highland Clearances, which saw the population drop from over 1,000 to what it is today.

It is this poignant history that has shaped the spirit of Raasay Island today.

Great location and facility for a quiet couple on nights away from all the hassle of the mainland with plenty of walks to do on Raasay (Forestry Commission). Beautifully renovated building with 6 bedrooms and a guest lounge plus breakfast room with stunning views of Skye. Breakfast was very good and evening meals in the Raasay House Hotel 200 yards down the road all works very well. Distillery tour also very good as is the tasting afterwards. Just book it and do it. Everyone on Raasay was very welcoming and helpful.

Brilliant in every way! From walking in the door to a drink in the bar, then early check in, gorgeous view from room, honesty bar to delicious breakfast in morning- just one of my favourite places ever I’ve stayed!

Great stay, probably the only one of its kind.

This unique location is romantic and beautiful. From the Distillery Inn at historic Borodale House, the views of the Isle of Skye are constantly changing as clouds shift, concealing and revealing the mountains across the narrow waterway. The small staff is devoted and dedicated to their guests, especially Chloe and Ethan. Breakfasts and dinners were delicious, thanks to Chef Chris. For variety, the Raasay House Restaurant is less than 10 minutes away by foot (look for the native hares on the grounds; we saw 5 one night). The Isle of Raasay distillery tour includes tastings of the exceptional whiskey and excellent gin. Jo was a perfect guide for novices and experienced drinkers alike. Our 4-day stay was perfect! Highly recommended.

The island of Raasay is the real gem here. Unbelievably beautiful. The distillery is grand. The whiskey is one of the very best in the land that makes the finest whiskey in the world. And the views from its front door are to die for.

What a beautiful spot. We stayed for one night and had the most comfortable, clean, stylish and luxurious room. The staff before and during our stay couldn’t have been more helpful. The Distillery is very modern and stylish and beautifully appointed. A lovely snug with very well appointed honesty bar allowed glorious views in the evening. A special highlight was walking into breakfast and seeing snow on the mountains outside through the picture windows- just beautiful. Breakfast was lovely. We had to dine at the next door Raasay House as there are no meals there than breakfast served but this was also delightful and easily walkable. Do not be put off by the ferry access – it is really easy and very friendly and regular. We didn’t visit the actual distillery on this occasion but plan to return and stay longer. Thank-you

Fantastic Room overlooking the Isle of Skye. Beautifully furnished to the highest quality. The Staff were extremely helpful and polite.

A very comfortable stay in an amazing spot!

Your Guide to Visiting the Isle of Raasay

We’ve curated a wide range of blogs, articles and guides all about getting the most out of your visit to the Isle of Raasay. From the best walks, most captivating views and our rich history, you’re guaranteed to find something that suits you. 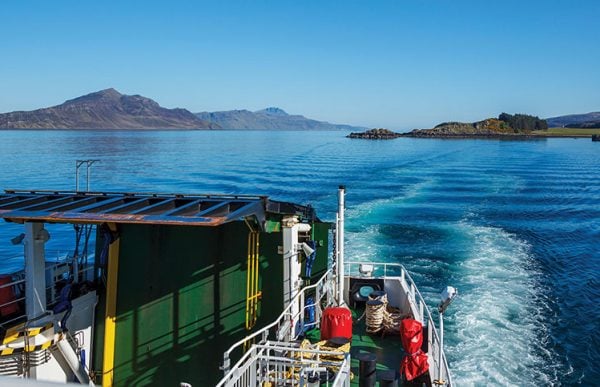 Exploring the rich history of travel and transport to the Isle of Raasay.Read More
Raasay Distillery Blog, Visit Raasay 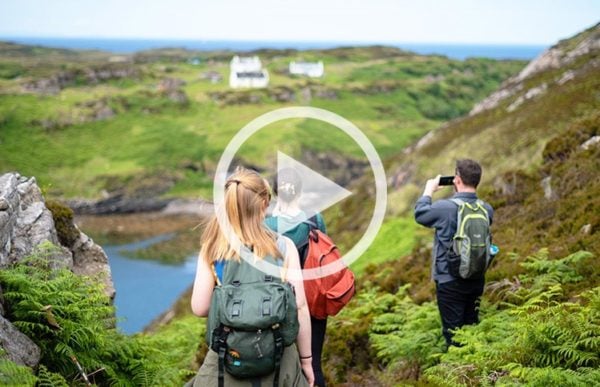 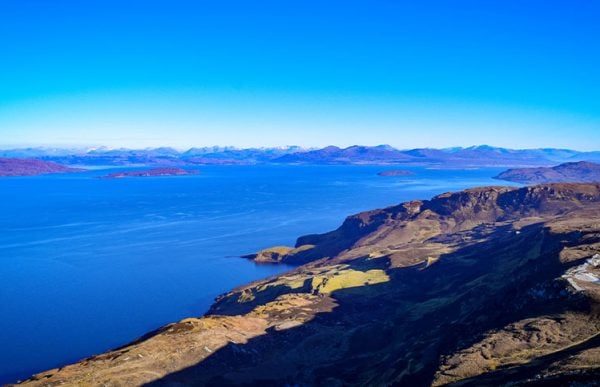 The Best Isle of Skye Views are from Raasay! 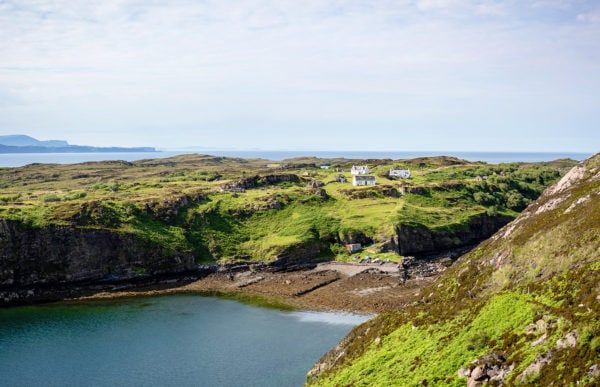 This year has seen some major improvements to Borodale House, the Victorian villa at the heart of the distillery. We are excited to now be able to offer evening meals in our restaurant serving locally sourced produce, including some of the best seafood and game anywhere in the world in a setting of similar standing. 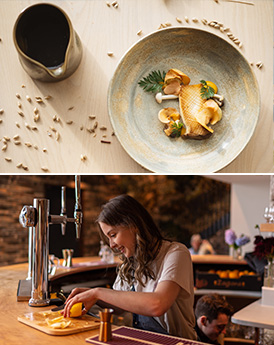